When Assia Sidhoum’s parents moved their family to Canada in the 1990s, they can scarcely have imagined that one day their daughter would play football for the Algerian national team.

However, her father's passion for football and amateur coaching experience helped nurture her talent from a young age and instil in her a love for football that would ultimately see her fulfil her entire family’s dream.

“When I was 18 months old, I emigrated with my family to Canada, but it never occurred to my parents that I’d become a footballer,” Sidhoum told FIFA.com. “Fate led me to be a footballer in the country of women's football. Eight years after I set foot in Canada, I started my journey in the beautiful game.”

"My dad coached my brother on the amateur scene here in Canada. I used to watch all the training sessions and attended their home and away games. My dad and my brother encouraged me to play football, and I loved the game. At the age of ten I started taking part in my brother’s team’s training sessions, before I decided to work on improving my abilities by doing twice the amount of training. Growing up, I looked up to Zinedine Zidane, who’s one of the reasons I chose football.”

Unlike some girls, Assia experienced no opposition as she embarked on her football journey. In fact, she received enormous support from her family. “I’m fortunate I was born into a family that loves football. My parents encouraged me from the very beginning. They have a very positive view of women's football," she explained.

Assia was born at the end of the year, which meant she would always play with girls older than her. Moreover, she was good enough to be picked for teams in older age categories, something she took in her stride. "My love for football prompted me to ask my parents to let me join a neighbourhood team. I started with Charlesbourg where my coach Stephen Marier realised I was gifted enough to join the team.

"I improved so much that I joined the U-14 side when I was 12, and at a friendly tournament in England I played against Manchester United and Aston Villa’s U-16 teams. I then joined the local Quebec team, where the adventure really started,” she explained.

After scouts realised her talent, Assia received a scholarship to Shattuck-St. Mary’s, a US high school specializing in talent development in a range of sports including football.

"It was difficult in the beginning because I wasn’t fluent in English, and it was the first time I’d lived away from my family. However, Shattuck-St. Mary’s is renowned for helping young people adapt and I quickly felt at home. The year I spent at the school was the best experience of my life and I’m indebted to them for my physical and technical development,” the 24-year-old said.

After just one year at the school, Sidhoum joined Niagara University, which opened the door for her to the National Collegiate Athletic Association (NCAA) Championship. "Playing in the NCAA was a dream come true," she said, adding "college tournaments give student athletes everything they dream of. We would train on pitches and in and gyms every day, and I felt that each new day provided an opportunity for development." 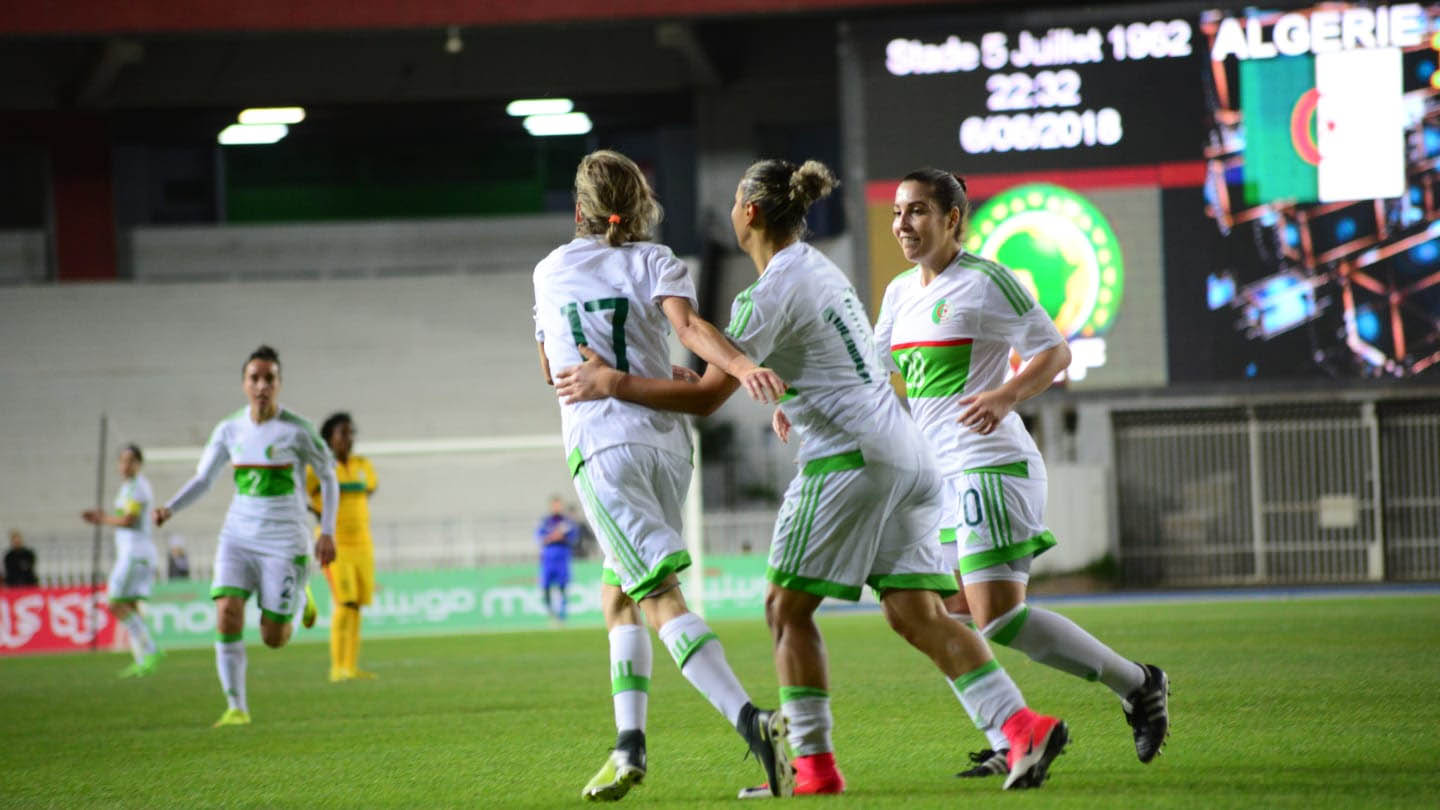 After a wonderful experience in the United States, Assia wanted to go back to Canada to be with her parents. She received a scholarship offer from University of Quebec, so she decided to return. Leaving the US was not a step backwards, though, and even turned out to be a blessing in disguise, coinciding as it did with a call-up to the Algerian national team.

"When I was in the US, I got a call from the coach of the ‏Algerian women’s team ‏Azzedine Chih. However, I officially joined the national team after I’d returned to Canada. I had a very warm welcome and I felt I was with my second family. I fulfilled my dream of playing for Algeria. I couldn’t believe I was actually wearing the team jersey and I wanted to seize every moment,” she explained.

"Algeria’s fantastic performance at the 2014 World Cup made me very proud to be Algerian. At that time, I made playing for the Algeria Women’s team one of my main goals,” Sidhoum added.

Asked about representing the country for the first time in Senegal, and how it felt to pull on the Algerian shirt in a competitive game for the first time, she said: "I can’t describe what I felt – I shiver now just thinking about those moments. It was so moving to hear the national anthem. Best of all was when my parents surprised me by coming from Canada to Algeria to see my second game. I shed tears when I saw them in the stands while the Algerian national anthem was being played. I felt then that I’d fulfilled the dream of my entire family,” she recalled.

Sidhoum was fortunate to participate in the Africa Women’s Cup of Nations just a few months into her international career and had a great experience there.

"That was wonderful," she enthused." When we arrived in Ghana, I realised how important the tournament is and what it meant to play for the national team. Playing against African teams in packed stadiums with that enormous media coverage was incredible. At the time, I thought to myself how amazing it was that this girl who had started her journey football from scratch had gone all the way to the African finals,” she said.

"Unfortunately, our results weren’t up to expectations. And while we failed to qualify for the FIFA Women’s World Cup, we do have a bright future," Sidhoum added.

After her experience in the United States and with the Algerian national team, Sidhoum joined French second division side Sporting club Albigeois, where the Canadian Arielle Roy-Petitclerc was playing at the time, but an injury brought a premature end to her French sojourn.

"I learned a lot from my experience in France, but things didn’t go as I’d hoped. I had an injury that forced me to return to Canada for treatment in the hope of making a quick return. That said, playing in France in addition to my experiences in the US, Canada and Africa has really strengthened my CV,” she said.

At the age of twenty-four, Sidhoum still has a long way to go with club and country. Asked about her future goals, she said, “I hope to recover quickly from injury and do all I can to help Algeria make the Africa Cup of Nations. Playing in the World Cup remains a dream from me. As for my club career, my dream is to play for one of Canada’s top clubs and why not move back to Europe or the US.”

Sidhoum wanted to send a message regarding the coronavirus, and finished our interview by saying: "I hope the world will defeat this pandemic soon and that this tragedy serves as wake-up call to care more for the elderly."